It's been an incredible 12 months at the Democracy Collaborative, and we thought we should take the time to collect all the new projects and publications we've worked on in 2013 to advance the field of community wealth building.

We started the year celebrating the launch of the third business in Cleveland’s Evergreen Cooperative network, Green City Growers ,  which is aiming to produce 3 million heads of lettuce and 300,000 pounds of herbs annually – while providing its worker owners with living wage jobs, no-cost health care benefits and wealth building through profit-sharing.

At the end of January, Executive Director Ted Howard keynoted the UK annual conference of Cooperative Futures during an inspiring trip to England and Wales.

In February, The Democracy Collaborative and the Department of Urban Studies and Planning at MIT released a joint case study, The Anchor Mission: Leveraging the Power of Anchor Institutions to Build Community Wealth , focusing on the path-breaking Vision 2010 Program implemented in Cleveland and Northeast Ohio by University Hospitals. Over a five year period, the initiative targeted more than $1 billion of procurement locally to create jobs, empower minority- and female-owned businesses and create a “new normal” for responsible, community-focused business practices in the region. In March, we released our report: Hospitals Building Healthier Communities, a uthored by research associate David Zuckerman, examining how hospitals strengthen local communities through engagement and economic development as they embrace an anchor mission. In April,  Democracy Collaborative co-founder Gar Alperovitz released his latest book,  What Then Must We Do?, and an accompanying film,  The Next American Revolution.   Monthly Review  wrote that Gar presents “the most accurate reading of contemporary economic reality and sets the stage for what could be ‘the next American revolution.’” He began a 24 city national speaking tour with an event in Atlanta at the MLK National Historic Site.

Ted Howard presented testimony before the Illinois Governor's Task Force on Social Innovation, Entrepreneurship, and Enterprise. The focus was on a set of actionable policy recommendations that would position Illinois as a leader among states in community wealth building.

we began work with the  Northwest Area Foundation  and several Native American tribes on a community economic development “Learning/Action Laboratory.”   The year-long program is providing high-impact training, education and entrepreneurial coaching to a cohort of the Foundation’s grantees.

Ted Howard spoke at a St. Louis Federal Reserve Bank event, entitled “Exploring Innovation in Community Development,” which was simultaneously webcast in four cities and broadcast nationally via streaming video. Speaking from the Memphis branch, his presentation focused on how community wealth building offers a new paradigm for sustainable economic development and included examples of best practices from across the country.

In June, we released the report  Raising Student Voices: Student Action for University Community Investment , a joint publication with the Responsible Endowments Coalition. Nationally, institutions of higher education control more than $400 billion in endowment investments. The study explored ways students, faculty, community organizations, and college administrators can work together to help ensure institutional investment policies benefit the communities in which America’s colleges are based.

Ted Howard spoke as part of an industry forum organized by Emerald Cities and hosted by The California Endowment, entitled “Leveraging the Power of Health Institutions to Build Community Wealth.”  Research associate David Zuckerman keynoted a workshop at the Connecticut Hospital Association on the opportunities for advancing an anchor mission created by the new Affordable Care Act requirements. In July,  The Committee on the Political Economy of the Good Society published a journal issue entitled “Symposium: Alternatives to Capitalism ,”  edited by our Research Director Steve Dubb, which explored community wealth building, public ownership, and the crisis of European social democracy. Gar Alperovitz published an  op-ed in the  New York Times on employee ownership entitled “The Legacy of the Boomer Boss,” highlighting the opportunity for expanding employee ownership presented by the wave of retiring baby-boom-era business owners.

Gar Alperovitz presented a keynote address at the Annual Conference of the Academy of Management, the nation’s leading professional association of over 17,000 business school professors and scholars, held in Orlando, Florida.

In September, we released The Anchor Dashboard, a  paper and companion research report based on extensive Democracy Collaborative research, including 75 interviews of anchor institution and community leaders. The Anchor Dashboard  identifies twelve priority areas and corresponding indicators that anchor institutions can use to assess current local conditions and evaluate institutional progress in aligning their activities with the needs of the community.  Highlighted by The Chronicle of Higher Education, NextCity, WYPR, Shelterforce, and What Works for America's Communities,

Responding to the question “What can I do to help build a democratic, local economy?” Gar Alperovitz and Keane Bhatt published "What Then Can I Do?  Ten Ways to Democratize the Economy," which appeared on Bill Moyers ' website and which was shared on Facebook by nearly 20,000 people. The article provided ten concrete action steps that individuals and groups can take to build wealth locally.

In October, the Anchor Dashboard was the conversation centerpiece at the Federal Reserve Bank of Richmond’s  Redefining “Rust Belt” four-city videoconference . Steve Dubb presented the Dashboard at  The Coalition of Urban and Metropolitan Universities’ annual conference  and Ted Howard presented the paper at the Municipal Arts Society Summit for New York City  and at the Initiative for a Competitive Inner City’s  Inner City Economic Summit in Cleveland.

In November, Sarah McKinley and Ted Howard presented the findings of the Anchor Dashboard  at the U.S. Department of Housing and Urban Development. Charles Rutheiser of the Annie E. Casey Foundation and HUD officials from the Office of University Partnerships also participated in the dialogue, focusing on how anchor institutions can consciously assess their impact on low-income communities.

Gar Alperovitz answered questions about his book What Then Must We Do?  as part of a Reddit AMA, and discussed elements of rebuilding US local economies in his article for The Nation, " How to Democratize the US Economy." 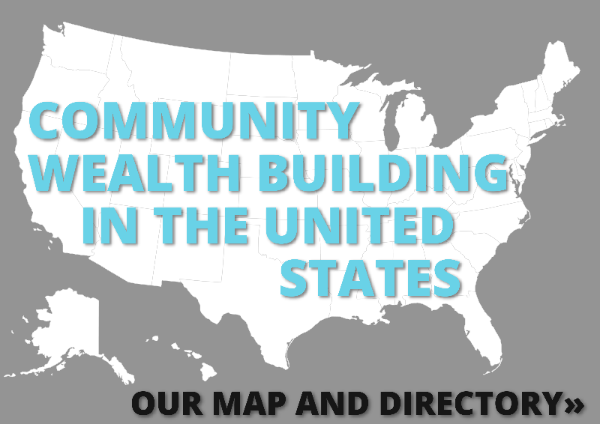 Ted Howard participated as a featured speaker on the Federal Reserve’s “Redefining Rustbelt: The Role of Anchor Institutions and the Arts” national audioconference, and we launched Community Wealth Building in the United States, an interactive atlas of projects across the country.

December also saw the first strategy workshop of the Next System Project, an initiative co-chaired by Gar Alperovitz and Gus Speth to promote bold new thinking about responses to the systemic challenges facing the United States. Held at the Ash Center at Harvard’s Kennedy School, this initial gathering brought together a select group of academics and activists to help set the terms of reference for the project launch.

Gar’s presentation at Madison's cooperatively owned Rainbow Books was broadcast nationally on C-SPAN's BookTV, and gave a talk at the New America Foundation which can be viewed online here. His presentation on the main stage of the Baltimore Book Festival was moderated and broadcast by WEAA's Marc Steiner. Also available are a select few of his many presentations from the Schumacher Center for a New Economics, Democracy Convention 2013, Elliot Bay Book Company, and Massachusetts Institute of Technology.

We continued our series of interviews with trailblazing leaders in the community wealth building field, with five new conversations in 2013: